How and When to Travel to Lugano

Lugano  is in the Swiss Canton of Ticino and the official language is Italian. Due to its international character, many people will speak English, German, French or Spanish, too. The city is situated at Lake Lugano on the Southern slopes of the Alps and benefits of a mild Mediterranean climate.

Airports  Lugano has a convenient small airport with a number of direct connections to and from Paris, Zurich, Bern, Geneva, Rome, and a few other European cities (changes are frequent). A daily connection to and from London-City Airport is available via Bern. However, the main airports are the intercontinental airports of Milan-Malpensa, about one hour south of Lugano in Italy, and of Zurich-Kloten, about three hours north of Lugano. Milan-Malpensa Airport is linked to Lugano by an Express shuttle bus (duration 1¼ hours, see below). Zurich-Kloten Airport has an underground train station with excellent train connections to Lugano; every hour there is a fast train to Lugano (via Zurich, about 3¼ hours).

Train connections: an interactive timetable  Lugano has very good rail connections to and from many other European cities. Many of these connections are by the spectacular "Cisalpino" tilting trains, which link Lugano with Zurich, Stuttgart, Como, Milan, Bologna, Florence, Verona, and Venice, as well as (via Milan) with Geneva, Bern and Basel. Travel arrangements for traveling to Lugano will be the responsibility of participants.

for the schedule of the Swiss Federal Railway. To get a list of the best train connections from Milan Central Station or Zurich Airport Station to Lugano, enter "Milan" or "Zurich Airport" as places of departure, as well as the approximate date and time of your planned departure from the train station. Once you have selected a connection, you can also download a personal timetable booklet in PDF format, Palm format, Psion format and other formats, or can request that it be sent to you by email.

Note concerning connections from Milan: Milan has several airports. If you wish to continue to Lugano by train, you will need first to take an airport bus to the city center (Milano Central Railway Station, ½ hour, then 1 hour by train). Alternatively, a shuttle bus travels about every two hours from Milan Malpensa Airport to Lugano-Paradiso and Lugano city center (Railway Station, 70 min altogether, reservation mandatory); find the shuttle timetable here or here or through the web site of Lugano Tourism (here). For inquiries, email info@busexpress.com or info@lugano-tourism.ch.

Start and End of the Summer School 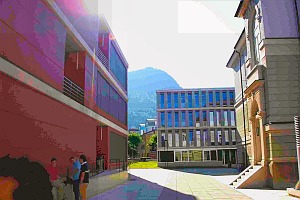 When and where does the Summer School start?  The Summer School starts on the first Monday morning at 9.15 AM in the room indicated in the Announcement page, either in the University's Main Building (the old renovated building – former "Ospedale Civico" – which also is the main entrance to the small University campus at Via Giuseppe Buffi 13), or else in the new  "Red Building," which is situated immediately behind the main building. Be sure to check the "Current Announcements" page shortly before the start of the Summer School for possible last-minute changes of the time or room of the opening session. To find Via Giuseppe Buffi, use one of the online maps proposed on the page "Additional Information."